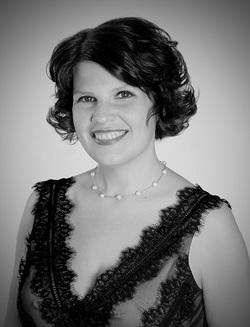 Soprano Mel Downie Robinson is an active musician based in Portland, Oregon.  She is in high demand as a professional chamber artist, soloist and clinician, and is a a member of the internationally acclaimed vocal ensemble Cappella Romana.   Mel is currently studying Byzantine Chant with renowned chanter/scholar John Michael Boyer, and is a chanter-in-training at the Holy Trinity Greek Orthodox Cathedral in NE Portland.

Mel is a frequent collaborator with local chamber groups such as The Ensemble of Oregon, Musica Maestrale, Resonance Ensemble and Portland Baroque Orchestra.  She has appeared with the Third Angle New Music Ensemble, Cantores in Ecclesia and the Vocal Arts Ensemble of Cincinnati.  Additionally, she is proud to be a former founding member of the Portland Vocal Consort and the Julians (Portland's own mash-up/crossover "lady band").  Mel has also earned recognition for her command of the French language and style, captivating audiences with her intimate interpretations of French repertoire from the Baroque through the present day.

Ms. Downie Robinson has a degree in Vocal Performance from the DePauw University School of Music and has worked with many of today's finest coaches and conductors including Nancy Zylstra, Stephen Stubbs, Marcel Pérès, Alexander Lingas, Mark Bailey, Ivan Moody and Achilleas Chaldeakis.  She serves on the Board of Directors of Cappella Romana and is Treasurer of the St. John of Damascus Society.